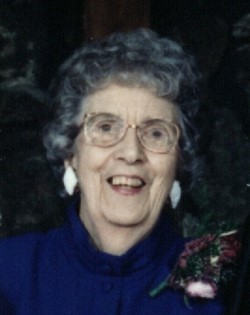 Guestbook 2
Blanche Bessey of Riverton died on Wednesday, April 30, 2008, at Riverton Memorial Hospital at the age of 96.

Graveside services will be at 1 p.m. Thursday, May 8, at Mountain View Cemetery in Riverton. Family and friends are invited to attend.

A viewing will be held from 7 to 8 p.m. Wednesday, May 7, at the Davis Funeral Home of Riverton.

Blanche Helen Douglas was born in Litchfield, Neb., on March 9, 1912, the daughter of Ira Wesley Douglas and Mary (Boecking) Douglas. She rode horseback to the school where she taught the first year after her graduation.

She married Lyle Bessey on March 22, 1930, in Madison, Neb. They moved to Riverton in 1936 and homesteaded a farm in the Lost Wells Butte area.

The couple farmed various places in Fremont County. They owned and operated a trucking business in the 50s and hauled livestock, cement, coal, and railroad ties. They sold the business and moved to the Buckhorn Flats area in 1965.

Mrs. Bessey worked in the restaurant business in her younger years and managed the former Wheel Inn Drive Inn and café that was located where Livestock Liquors is now. She was employed as a cook at Fremont Manor nursing home for many years and later in housekeeping there until her retirement at age 70.

Her family described her as a hard-working, loving person who always put others first. They said her greatest pleasure was her family.

She was preceded in death by her husband, Lyle Bessey; two sons, Marlin Bessey and Dean Bessey; a great grandson, Jeremy Lambert; her parents, Ira and Mary Douglas; two brothers, Willis Douglas and Leroy Douglas, and a sister, Nina Albers.