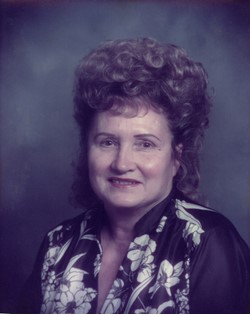 Guestbook 0
Margaret "Mickie" Daniels of rural Riverton died at Riverton Memorial Hospital on Saturday, April 21, 2007. She was 84 years old. Funeral services will be at 2 p.m. Friday, April 27, at the Davis Funeral Home of Riverton. Bishop Wendell Richardson of the Church of Jesus Christ of Latter-day Saints will officiate. Burial will follow at Mountain View Cemetery in Riverton. Viewing will be from 4 to 8 p.m. Thursday, April 26, at the funeral home. Margaret Wagner was born in Bridgeport, Nebraska on Dec. 19, 1922, the daughter of Marion and Mary (Hall) Wagner. On Aug. 31, 1940, she married Edward Lemar Daniels in Bridgeport. She came with her husband from Nebraska in 1948. Mrs. Daniels was a homemaker and well-known and talented artist whose paintings won many awards. She was a member of the LDS faith and belonged to the Relief Society for many years. She was a member of the Order of the Eastern Star. Her family said she enjoyed quilting, cooking, the company of her family, visitors, friends of many ages and backgrounds, always had coffee ready, enjoyed working on her three-acre yard with its lily pond, and decorating her home. For a period of time, she owned and operated Mickie's Studio, specializing in furniture, home decorating, and refurnishing furniture. Survivors include a daughter, Deanna B. Goodmundson of Santa Fe, N.M.; eight grandchildren and numerous great grandchildren; brothers, James Wagner and his wife Rachael, and Sam Wagner and his wife Alice; sisters-in-law, Emma Wagner and Esther Wagner; numerous nieces and nephews. She was preceded in death by her parents; her husband, Edward Lemar Daniels on Oct. 22, 1981; a son, Sky L. Daniels, one sister, and two brothers. Memorials may be made to St. Jude's Children's Hospital, in care of the Davis Funeral Home, 2203 West Main, Riverton, WY 82501. On-line obituaries are available and condolences for the family may be made at: thedavisfuneralhome.com Services are under the direction of the Davis Funeral Home of Riverton.