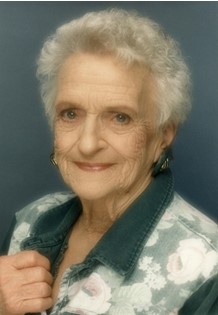 Guestbook 2
Violet E. "Vi" Fabrizius of Riverton died at Wind River Healthcare in Riverton on Wednesday, April 30, 2008, at the age of 91.

At her request, cremation has taken place and no services will be held.

Violet E. Wilson was born in Riverton on Dec. 6, 1916, to Fred and Sophia (Diemer) Wilson. She attended schools in Riverton and later moved to Chadron, Neb., for a short time, where she was graduated from high school.

Her parents divorced and she moved back to Riverton. Her grandparents worked for the railroad at Arapahoe. In her teen years, she worked at the General Store at Arapahoe.

Mrs. Fabrizius began working at Riverton Memorial Hospital in the 1950s and then worked for Wind River Medical Group until she retired.

Her family said Mrs. Fabrizius was well-known for her sense of humor. They said she enjoyed visiting with her family and friends and watching television. Her family knew her as "GG."

She was preceded in death by her husband, George, on April 5, 1984; her parents; a brother, Lester T. Wilson; several brothers- and sisters-in law.

Memorials may be made to the American Cancer Society, in care of the Davis Funeral Home, 2203 West Main, Riverton, WY 82501.