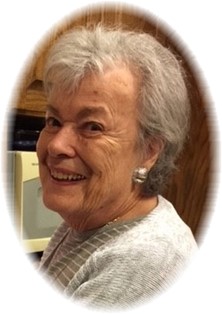 Guestbook 19
Mary Katherine Lansing, 79 of Riverton passed away January 19, 2017 at Wyoming Medical Center in Casper. A memorial service will be held at 11:00 am on Friday, January 27, 2017, at St. James Episcopal Church.

Mary Katherine Lawler was born on March 15, 1937 in Chicago, IL to James G. and Gertrude Todd (Pinkerton) Lawler. She grew up in Chicago and was educated, at a private school (Kemper Hall) from which she was graduated.

On January 10, 1959 she married William Richard Lansing in Chicago, IL. Shortly after they married they moved to Riverton, WY where Dr. Lansing opened an Optometry practice. They raised their three daughters: Kathy, Diana and Lynny in Riverton where they were very active in the community. Dick passed away on 02/16/1998 and Mary Katherine remained in Riverton the rest of her life.

She was baptized into the Episcopal faith and was very involved in her church, St. James Episcopal. She served on the alter guild for many years which included making the bread for Eucharist, serving on the church vestry , was a Daughter of the King where she was very active on the St. James Trust Board.

Mary Katherine was a bookkeeper for Dick’s practice, which later became Riverton Vision Center. While being an active member in the community she was also a homemaker and raised three daughters.

She enjoyed many adventures including boating, camping, golfing and hiking which helped foster her love for the outdoors. Recently she was a member of multiple bridge and mahjongg groups. Mary Katherine was an active member of P.E.O. Chapter H, Daughters of the Nile and a volunteer at the Riverton Hospital.

She was preceded in death by her husband of 39 years William “Dick” Lansing; parents, Jimmy and Toddie Lawler; and her brother, Tom Lawler.

Memorials may be made to the St. James Episcopal Trust Fund in care of the Davis Funeral Home, 2203 W. Main Street, Riverton, WY 82501.