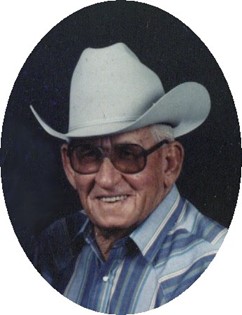 Guestbook 0
Funeral services for Walter J. Hughes of Riverton will be at 10 a.m. Monday, May 19, at the Davis Funeral Home of Riverton. The Rev. Cleve McSwain will officiate and interment will be at Mountain View Cemetery in Riverton. Military honors will be presented by the Army National Guard. There will be a viewing from 8 to 10 a.m., preceding the services Monday at the funeral home. Mr. Hughes died on Wednesday, May 14, 2008, at Riverton Memorial Hospital. He was 86. Walter John Hughes was born in a log house on his paternal grandmother's ranch southwest of Lusk, on Willow Creek. With one exception, he lived and worked on various ranches in that area until 1940. His father moved the family to Sand Point, Idaho, where he worked in the timber and the young Walt started school there. In the spring, the family returned to the ranch. He attended the Payne School, the Meadowdale School, and the Fahy School. All were rural schools in the Flattop area. He attended high school in Manville and Sunrise, leaving school when he was a junior. In 1940, his father drew a homestead in Paradise Valley northwest of Riverton. He helped his father breakout the homestead and worked in construction and on ranches around Riverton. He made one trip to California with a group of young men from Paradise Valley, but stayed only a brief time, telling his family later that "California wasn't for him." Mr. Hughes was drafted into the U.S. Army on Jan. 11, 1943, at Fort Warren, Wyo. He served as a heavy truck driver with the 826th Engineer Aviation Battalion with battles and campaigns in Normandy, Northern France, Rhineland, and Central Europe. He transported supplies to Patton's Third Army in the Battle of the Bulge. He received an honorable discharge from military service at Fort Logan, Colo., in December of 1945 and returned to Riverton. He married Ruth Darlene Lauer on June 25, 1950, at the Church of the Transfiguration at Moose in Teton County. In the fall of 1946, he went to work for Amoco Production Co. at the Beaver Creek Field and worked there for 33 years, retiring in 1980. His family said Mr. Hughes enjoyed helping his rancher friends round up and brand their cattle. Survivors include his wife, Ruth Hughes of Riverton; a brother, Curt Hughes and his wife Donna of Thermopolis; a sister, Patricia Ann Collins and her husband Jim of Cheyenne; numerous nieces and nephews; special friends, Deanna and Joe Crofts and sons Walter and Paul of Riverton. He was preceded in death by his parents, Victor Curtis Hughes and Eva Marie (Wentworth) Hughes; a brother, Robert "Bob" Hughes; a sister, Shirley Spencer, and a niece, Judy Spencer. Memorials may be made to the Fremont County 4-H Scholarship Fund in care of the Davis Funeral Home, 2203 West Main, Riverton, WY 82501. On-line obituaries are available and condolences for the family may be made at: thedavisfuneralhome.com Services are under the direction of the Davis Funeral Home of Riverton.