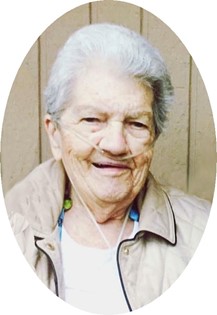 Myrna Farthing was born October 30, 1926 in Lander to Thomas and Laura (Anderson) Farthing. She is descended from two of Lander’s earliest pioneer families. Her grandfather Peter Anderson emigrated from Scotland and arrived in the South pass area in 1870, marrying schoolteacher Lara Nicol in 1882. Her Grandfather Edward Farthing and wife Eliza emigrated from England and arrived in the Lander are in 1881. Myrna grew up on the family farm five miles from Lander attending 1st through 6th grades at Boulder Hill Country School. She became one of the lucky students to attend the brand-new Lander Grade School, which was later renamed South Elementary School. After graduating from Fremont County Vocational High School in Lander in 1943, she moved to Denver and attended Business School.

To aid in the war effort, she took her training and moved to Auburn, California, where she worked for the Quartermaster at DeWitt General Army Hospital. After the war, in 1946 she moved to Denver where she met her future husband, Jim Milleson. They were married in 1948 and had two children, Mary and Nancy. They decided Lander was where they belonged so they moved back in 1953, where they had two more children, Tom and Dave. Myrna worked for Fremont Title Company as an abstracter from 1955 until her retirement in 1988. After 64 years of marriage, her husband Jim passed away in 2012. Due to her failing vision, Myrna moved to the Homestead Assisted Living Facility in Riverton in 2014.

She is preceded in death by her parents; husband, Jim; brothers, Jim Farthing and Bill Farthing.

Memorials may be made to the Fremont County Pioneer Association or the United Methodist Women in care of the Davis Funeral Home, 2203 W. Main Street, Riverton, WY 82501.