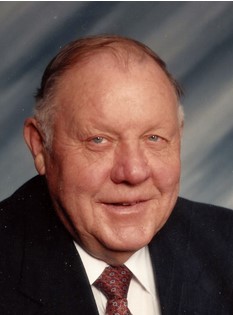 Duane G. Manfull, 88, passed away on February 5th 2017 in Laramie Wyoming. He was born July 23rd 1928 in Laramie Wyoming to Dora (Shultz) and Gardner Manfull. He graduated the University of Wyoming with his Bachelors in Civil Engineering in 1950 and completed his Masters the following year in 1951.

Duane married Virginia (Canaday) on June 6th 1951. During the Korean War he was stationed in Ulm, Germany as a commissioned officer with the Army, a first lieutenant. Virginia and Duane moved to Thermopolis where he operated and owned Charles M. Smith Construction.

In 1961 he and Virginia had a daughter Julie (Manfull) Schroyer.

During Duane’s career he built bridges all over Wyoming and Montana. In 1965 he was president of the Wyoming Contractors Association. While president he was most proud to have been instrumental in developing a medical and retirement plan for contractors across the state.

Duane was widowed in 1988. He worked for the Gilpatrick Construction Company in Riverton until he retired in 1990. He continued to consult around the state for a few years. In 1999 he married Doris (Lanthrop) Bunn. Together they traveled the world and played golf in all 50 states.

He was preceded in death by his first wife: Virginia, parents, his sister Colleen (Manfull) and her husband Dwight “Bubby” Osborn. He is survived by his wife Doris, daughter Julie whom he adored along with her husband Gordon Schroyer and his grandchildren Eric Schroyer, Chris Henry and Jackie Henry. He is also survived by his nephews Michael Osborn and Bob Jr. Canaday along with his nieces Ann (Osborn) Chopich and Mardi (Canaday) Carl and many extended family members.

Duane will be missed by all of his family and friends.

In lieu of flowers please donate to your charity of choice or the American Heart Association.