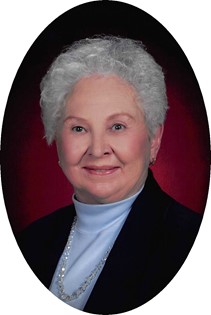 Rosalie Helen Giesler was born July 4, 1932 in Laramie, Wyoming to Roland and Lulu (Austin) Giesler. She always thought that being born on the fourth of July was extremely fortunate and loved the fireworks that celebrated her birthday. She received her education from grade school to the University of Wyoming in Laramie. It was at the University that she met her future husband Phillip Flanagan. They were married on June 22, 1957. Rosalie taught school in Rawlins, Casper, Gallup New Mexico and Riverton. She was also one of the original teachers of President Johnson's adult classes on Poverty where she helped with GED classes. She received her training for this venture at the University of Colorado. She also worked with Phillip Flanagan and Associates and General Nuclear. Over the last 35 years Rosalie took care of her husband’s business ventures after his passing.

Rosalie and Phil moved to Riverton in 1958 raising their 4 children. Through the years Mrs. Flanagan enjoyed working with the Cub Scouts, Brownies, St. Margaret's School, Little League and 4-H. She enjoyed following her children and grandchildren adventures in Football, Basketball, Swimming, Skiing and Barrel Racing among other things. Rosalie also enjoyed reading, crossword puzzles, genealogy, playing with her dogs and gardening.

One of the things Rosalie was most proud of was her ability to fund worthy individuals who might need a little push to finish their college education and to fund scholarships at Saint Margaret's School.

Mrs. Flanagan considered herself very fortunate for having been born in the United States, born in Wyoming, and born Catholic. She was a member of St. Margaret’s Catholic Church in Riverton.

She was preceded in death by her husband Phillip E. Flanagan in 1982; her parents Roland and Lulu Giesler; two brothers, John and Jim Giesler; and sister Joan Marusich.

Memorials may be made to the St. Margaret’s Foundation in care of Davis Funeral Home, 2203 West Main Street, Riverton, WY 82501.