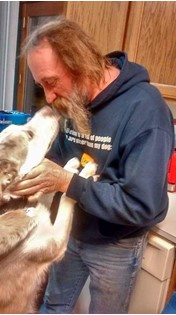 Guestbook 7
A Celebration of Life for Riverton resident Ronald Wayne Kruske, 54, will be held 1:00 p.m., Sunday, June 4, 2017 at the City Park Band Shell. A pot luck will follow services at the Rocky Mountain Discount Liquors.

Ron died on May 28th due to a motorcycle accident.

He was born on December 26, 1962 in Deadwood, South Dakota, son of Donald Darrell and Sandra Jean (Anderson) Kruske.

In 1981, Ron graduated from the Riverton High School, which was the first graduating class of the new high school.

He worked in the oil fields in North Dakota and Wamsutter for Nabors Drilling. He also worked as a fireworks fabricator for 3 years and the City of Riverton as a Driver/Operator having various duties which included driving the garbage truck.

Ron loved his dog, “BSOTA” and enjoyed riding his motorcycle, listening to music and building and launching model rockets.

Ron was baptized in the Bethel Lutheran Church in Lead, South Dakota.