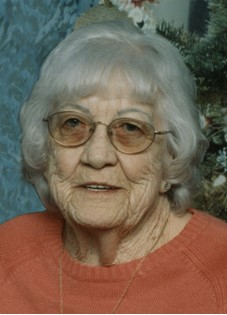 Guestbook 0
Funeral services for Minnie "Lorean" McNary Nelson of Shoshoni will be at 2 p.m. Saturday, April 28, at the Davis Funeral Home in Riverton. The Rev. Dale Gibson will officiate. Cremation has taken place. Inurnment will follow at Mountain View Cemetery in Riverton. Mrs. Nelson died Saturday morning, April 21, 2007, at Riverton Memorial Hospital at the age of 86. Minnie Lorean Hintz was born in Stuttgart, Ark., on Oct. 16, 1920, the daughter of Frank Hintz and Lovie Dee (Buffington) Hintz. She was graduated from Seminole (Okla.) High School in 1936 and attended the school of nursing at Northwestern University, being graduated in 1939. On Oct. 29, 1939, she married George Edward McNary in St. Charles, Mo. A daughter, Mary Kathryn Lynnette, was born to this union but died of pneumonia at the age of four months, on Aug. 24, 1945. Mr. McNary died on Aug 24, 1972. She married Harry Eugene Nelson on Feb. 14, 1974, in the Riverton Presbyterian Church, with the Rev. Raymond R. Kreps officiating. Mrs. Nelson practiced her nursing career for 32 years, working as an "angel of mercy" during World War II, caring for the sick and injured coming home from the war. She was a member of the Order of the Eastern Star #21 in Riverton, VFW Auxiliary #3628 in Riverton, a past president of the Shoshoni TV Association and the Coffee Cup bowling league. Mrs. Nelson was of the Baptist faith. She is survived by step-children, Shirley Ann Green of Hartford, Ala., Kirby Gene Nelson of Hillrose, Colo., and Benjamin Earl Nelson of Shoshoni; four grandchildren and three great grandchildren; adopted daughters, Carol Bregel of Las Vegas, Nev., and Wilma Pizarro; three nieces and four nephews; sisters-in-law, Leona Kimberly and Betty Nelson. She was preceded in death by her parents; a daughter; her first husband, George McNary; husband, Harry Eugene Nelson; sister, Violet Corean (Hintz) Gilsinger; brothers, Franklin Hintz, J.C. Hintz, Sedford Hintz, Fredrick Max Hintz, and Vernon J. Hintz. Memorials may be made to the Shrine Hospital for Crippled Children, Fairfax Road at Virginia Street, Salt Lake City, UT 84103-4399. On-line obituaries are available and condolences for the family may be made at: thedavisfuneralhome.com Services are under the direction of the Davis Funeral Home of Riverton.