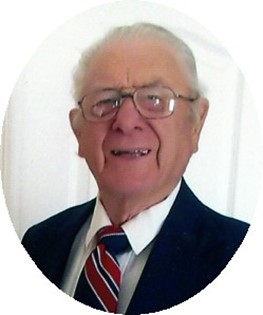 James “Jim” McGuire, 91, of Dubois, died at the Help for Health Hospice Home on Monday, July 17, 2017. The Celebration of Life will be at 2:00 pm on Friday, July 21, 2017, at the New Creation Fellowship Church. Interment will follow at the Dubois Cemetery with full military honors.

James Russell McGuire was born on July 13, 1926 in Cheyenne, WY to Aaron and Helena (Kasicki) McGuire. He grew up in Big Rapids, MI with his sister, Jean, and his brother, Jack. He graduated from Big Rapids High School with the class of 1944. After graduation he enlisted in the U.S. Army serving two years before being honorably discharged. He returned to Michigan and attended Michigan State University earning his Bachelor’s Degree in Education in 1950. He later went on to earn his Master’s Degree and finally a Doctorate of Education.

In 1950 he married Mary Westover in Big Rapids, MI. They had five children, Eunice, Ruth, Rebecca, Rachel, and Timothy. They later divorced. On January 1, 1983, he married Lorine LaCour Van Dane in Chicago, IL. From this he gained three step-sons, Charles, Timothy and Richard. In 1985 the couple moved to Dubois and made it their forever home.

Jim’s first teaching job was in 1950 at the high school in Farwell, MI as the Agriculture Teacher. That was just the start to a 32 year career in education. He held his first administrative position as a Principal in 1964. A year later he became the Superintendent of the School District and the last position he held was Intermediate Superintendent of Mason counties and all of their schools. He retired in 1982 but not before earning many awards, some of which included, Outstanding Award in Education from the Bay City Times Newspaper in 1978, Special Allocates from the Michigan Department, and he was the main person instrumental in building the first special needs school in Mason County Michigan.

He was a member of the Gideon’s from 1962 through 1982 and was a life time member of the Lion’s Club. He received the Mervin Jones Fellowship Award from the Lions in 2017.

His passion was fishing and hunting and loved to spend time with his children and grandchildren. His family said that he never passed up a hitchhiker even at their urging not to for safety reasons, but he was never hurt. They said that he was an extremely generous and was always helping others. Last year the family threw a big 90th birthday party and he was so humbled by everyone that attended and for the praises he received.

He was preceded in death by his parents, Arron and Helena McGuire and brother, Jack McGuire.