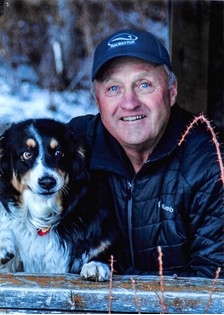 
Michael Raymond Brown, beloved son, brother, husband, father, grandfather, uncle, and friend to all he met passed from this life suddenly on August 13, 2017 at Wyoming Medical Center. Mike’s generous, loving spirit will be deeply missed by all.

Services for Mike will be held Saturday, August 19th, at 11:00 a.m. at the Antelope Hills Golf Course in Dubois, Wyoming. A carry-in luncheon at the Rustic Pine Tavern will immediately follow the service. Burial will take place at a later date. Cremation has taken place.

Mike was born January 27, 1953 the fourth of five children born to Rolland “Rollie” and Catherine “Petie” Brown in Riverton, WY. As a precocious child growing up his family resided in St. Stephens, Riverton and Dubois. Throughout the years his affection for Dubois grew as much for the surroundings as the people in it. For these reasons Dubois, is the place he would always call home.

At Riverton High School Mike was a three-sport athlete, quarterback in football, guard in basketball and pole vaulter in track. He was all-region and all-state in basketball. He earned nine letters for the Wolverines, three in football, track and basketball. Once compared to Larry Bird, Mike was quick to reply “yeah, but I’m better looking and can jump higher”. He was Wyoming class AA pole vault champion in his senior season and graduated from Riverton with honors in 1971. He was considered by many to be one of the best athletes in Wolverine history. Mike accepted an appointment to the Air Force Academy where he played football for the Falcons as a kicking specialist. His seasons with the Falcons included games wherein he competed against such players such as Jon Keywoth (Denver Bronco fullback) and Cullen Bryant (LA Rams’ all-around all-star). He then transferred from the Airforce academy to Utah in the fall of 1973 where he played for the Utes as a kicker/punter until 1976.

He graduated from the University of Utah with a Bachelor’s degree in Business Management and went on to work for Allstate Insurance for over 30 years. His job allowed he and his family to live in Colorado, Montana and Wyoming, where his heart truly resided. He started as an agent and worked his way up the corporate ladder to become a sales and marketing leader and finally to an executive agent owning the Mike Brown Allstate Agency in Riverton until the time of his death.

Prior to his days as an all-star, all the way back in the 6th grade Mike met the love of his life, Geralynn Hart, he just didn’t know it yet. Over the years he tried different tactics to get her attention, finally succeeding in 1973. On March 22, 1975 Mike and Geralynn were married in Dubois, WY. Throughout the years Mike still looked at Geralynn like she was the only girl in the world. Always doing his best to spoil her with sweet words and adventures. The night prior to his death they enjoyed a night on the town dancing and enjoying each other’s company.

In 1976 their first son, Billy Jack, was born. He was followed very shortly by Cody in 1977. Hellraisers like their dad, Mike considered both of his boys his greatest accomplishment. That pride expanded exponentially with the addition of all four of his grandchildren.

Mike, an avid outdoorsman, could be found in the fall hunting antelope in area 67 when he was lucky enough to draw a tag, which was more often than not. He will be taking an area 67 tag along with him to his new home this season. He loved hunting of all types. If there were coyotes or prairie dogs in the area they better watch out because Mike had crosshairs on them. He enjoyed fly fishing and the Wind River was his bastion. He loved doing all these things, but most of all he loved doing them with his family and friends.

Mike’s passion was for golf, leading Geralynn to sometimes question who he loved more. Neither rain, nor sleet, nor dark of night could keep Mike from his golf game. Mike had a tee time at 9:30 am on the day of his death although he wasn’t able to keep his tee time here on earth he surely made it on the fairways of heaven.

Mike is survived by his beloved wife, his son Bill and his wife Ambrosia - their three kids Maddi, Gavin and Abbi and his son Cody and his wife McCall and their son Baylor. His siblings Charlie (Cindy) Brown, Daria Wood, Michele Jensen, Chris (Bill) Johnson. His mother-in-law Alice Hart and numerous aunts, uncles, cousins, nieces and nephews.

He was preceded in death by his parents, his father-in-law, Gerald Hart, brother-in-law, Leonard Wood. nephew, Justin Wood, and great nephew, Korbin Hanson.

In leiu of flowers donations can be made to Riverton High School Golf Program in care of Davis Funeral Home, 2203 W. Main Street, Riverton, WY 82501.