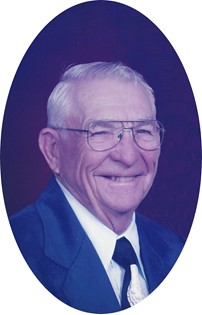 Guestbook 6
Funeral services for Paul Alden Christensen of rural Riverton will be conducted Saturday, September 30, 2017 at 2 pm at Davis Funeral Home in Riverton, with the Rev. Echo Klaproth officiating. Interment will follow at Mountain View Cemetery.

A viewing will be held Friday, September 29 from 5-6 pm at Davis Funeral Home.

Paul Alden Christensen was born October 27, 1922, in Brush, CO to Ted and Sophie Christensen. He grew up and graduated from high school in Brush, CO. After serving in WWII as a supply truck operator in the European theater, Paul returned home.

On May 12, 1946, he married a beautiful young telephone operator, Elisabeth “Lizzie” Monrad whom he met at Lutheran Summer camp. They lived in Brush, Colo., and farmed his father’s place from 1946 until 1948, when they drew a homestead in the Riverton area. Paul began farming near Midvale at that time, and Liz joined him in 1949 with their two sons ages 1 and 2. Their daughter arrived in 1954. They were the only remaining homesteaders still living on their original place in 2008. Their 62-year marriage has been an inspiration and example to their children and grandchildren. Paul was a farmer his entire life. He was an avid bowler. He loved square dancing, and he and Liz had been members of the Riverton Hoedowners for more than 35 years. As his kids and grandkids can attest to, they loved to dance and were often the last ones to leave the dance floor. Paul served on the Fremont County Fair Board, the Midvale Irrigation District Board, Soil and Water Conservation Board, and Riverton Memorial Hospital Board. He served as the County Fair Parade Marshall and was voted Ag Man of the year in 1994.

Memorial donations may be made to Help for Health Hospice Home, in care of Davis Funeral Home, 2203 W. Main, Riverton, WY 82501.