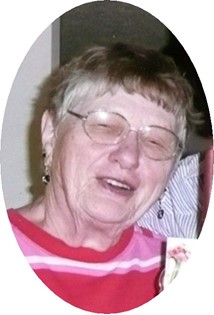 Guestbook 3
Verdell A. Stegman, 81, of Thermopolis, passed away at her home with her husband, daughter and son-in-law at her side on Tuesday, September 26, 2017.

Verdell was born July 26, 1936 in Backoo, ND to Norval and Violet (Schroeder) Quam. She grew up on the family farm and finished high school in Cavalier, ND.

On November 23, 1954 she and Edgar A. Stegman were united in marriage. The couple lived in several Wyoming towns, as well as Nebraska City, Nebraska, and Kansas City, MO before returning back to Wyoming in 1967, settling in Thermopolis.

Verdell worked at various restaurants as a waitress and took great pride in the service she provided to her customers. She was happiest taking care of people, always putting others before herself. She loved children, especially babies and was there to take care of her grandchildren and many others who were in need of child care. She was a wonderful cook, baking the best breads and rolls. She had the family get togethers for all the holidays and never missed anyone’s birthday without a special meal. Everything was homemade from scratch she never believed in fixing something from a box. She taught Sunday school and was a member of St. Paul’s Lutheran Church. Along with her husband and son, Kurt, they traveled to many places, never to just go and see a new area but to see specific people who had become their dear friends over the years. Verdell is going to be so sadly missed and so very fondly remembered by those who knew her.

A memorial service will be held at St. Paul’s Lutheran Church on Saturday, October 14th at 10:00 am. Gathering and lunch will follow after the service at the church fellowship hall.