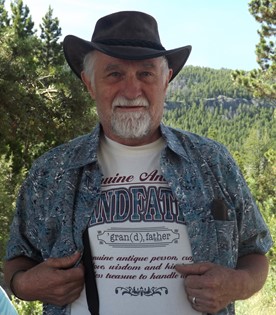 Guestbook 15
Kelvin Kenneth Plumb was born on January 12, 1952 to Kenneth Plumb and Bernice (Neard) Plumb in Sheridan, Wyoming. His mother died shortly after his birth. In 1952, Kenneth married Joan Dewey and began their lives together, being blessed by three more children in the years to come. Kelvin attended grade school in Sheridan and enjoyed the love of his grandparents, who all lived nearby. In 1963, he moved to Lander with his family. He worked at the Grand Theater in Lander from the time he was 15 years old and loved the theatre business. He graduated from Lander Valley High School in 1970. In 1971 he married Mary Beth Lee at the Holy Rosary Catholic Church. The moved to Helena, Montana the next year and he began his career with the Theatre Operators Incorporated. The next 13 years found the couple and growing family moving to six Montana towns, Grants, New Mexico, and Prescott, Arizona managing theatres. The moved back to Wyoming in 1984. The couple raised three daughters and was active in the Ascension Catholic Parish. In 1995, he married LuAnn (McFarland) Ogg at the First Baptist Church in Riverton where they raised a blended family with love and grace. He obtained employment at Wal-Mart and the Fremont County Fairgrounds. He was an active member of the Cornerstone Community Church and looked forward to cooking for their Men’s Breakfast every month. Kelvin died peacefully at the Help for Health Hospice Home on September 28, 2017 after a month-long battle with cancer. He was surrounded by his wife, three daughters, and his soul brother.

Kelvin’s first love was Jesus but LuAnn and his family were a close second. He loved golfing, hunting, fishing, and camping but only if he could share the experience with others. For over 30, years, Father’s Day weekend was reserved for a family campout and everyone looked forward to spending time together. He was a planner. When he planned a vacation, he planned it with his grand-children in mind. He made time with them every chance he could and they loved being around him. He was a kind-hearted man and was never afraid to express his feelings. Working two jobs and very little sleep rarely dampened his spirit. He always had a smile on his face and quick wit to go with it. Friends and family recall that he was a good listener, gave wonderful advice, and was quick to help when needed. During the las month of his life, he visited with all his family and friends. He was even blessed to see his newest grandson, Peyton. His room was always filled to capacity during the day and close family made sure that he was never alone at night. There is no doubt that he is now with his first love and that consoles his family and friends.

A Rosary for Kelvin will be recited at 1:00 p.m., Friday, October 13th at the Fremont Building of the Fremont County Fairgrounds. A Celebration of Life service will follow at 2:00 p.m. Pastor Ian McFarland from the Cornerstone Community Church will officiate. Lunch will be provided after the service and Cornerstone Community Church will prepare the main course. Attendees are asked to bring a covered dish and a favorite story about Kelvin to share.

In lieu of flowers, his family is requesting that memorials be made in his name to the Help for Health Hospice.