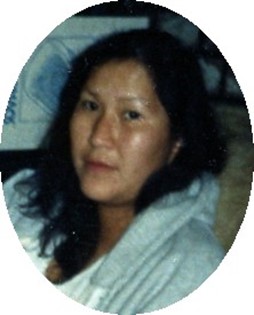 Guestbook 4
Funeral services for Francene Jean Bell, 57, will be held at 10:00 a.m., Wednesday, October 25, 2017 at St. Stephens Catholic Church with Father Jim Heiser. Interment will follow at the Arapaho Catholic Cemetery. A Rosary will be recited at 7:00 p.m., Tuesday, October 24th at Great Plains Hall with a wake to follow.

She was born on February 3, 1960, daughter of Theodore Delbert and Gertrude Jeanette (Goggles) Bell in Riverton, Wyoming.

Francene received her CNA License and helped deliver many babies serving as a midwife. She also worked as a cook for the Arapahoe and Shoshone Headstart and the St. Stephens School.

She enjoyed reading, singing, dancing and spending time with her grandkids along with her family and friends. Francene also had a passion for cooking.