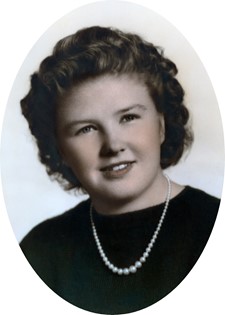 Virginia Mae Forbis was born on February 10, 1929 in Riverton, WY to Roy Robert and Eliza Amelia (Weight) Forbis. She grew up in Riverton and graduated from Riverton High School on May 22, 1947.

She was baptized into the Jesus Christ Latter day Saints faith and later in her life became a member of St. John’s Lutheran Church in Riverton.

Shortly after graduation on June 7, 1947 she married her high school sweetheart, William Robert Cantrell in Riverton, WY. They shared 50 wonderful years together before he passed in 1997.

She was a member of the Riverton Valley Grange with her husband and she continued after he passed.

She drove school bus for Fremont County Schools for many years before retiring.

She was an avid embroider, making beautiful pieces that became heirlooms. She also loved putting picture albums together and taking pictures of cows, they made her happy.

She was preceded in death by her husband, William Cantrell; parents; brother, John Forbis and Guy Forbis; and daughter-in-law, Patricia Cantrell.

Memorials may be made to Help for Health Hospice Home or Homestead in care of Davis Funeral Home, 2203 West Main Street, Riverton, WY 82501.