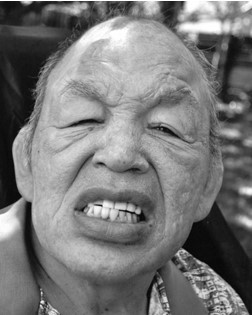 Guestbook 13
Lawrence “Larry” Weasel Head died peacefully at his home on December 1st 2017. He is a member of the Black Feet Nation. He was 62 years old.

Larry lived at the Wyoming State Training School during his earlier years. He loved to hang out at the maintenance shop and help them work on any project they had going at the time. He had his ‘own keys’ and ‘supervised’ all of their work. Larry learned a lot from maintenance and knew how basic items worked. He also had a three-wheeled bike when he was there and he rode all over the grounds independently. One of the jobs he took on himself was to lead the ‘food truck’ from house to house at meal times to deliver meals to the cottages. Twice each month he would also lead that truck to deliver supplies to each of the cottages and houses. He definitely knew the route, used hand signals to let you know when to stop and when it was okay to go. He took great pride in his ‘job’.

In March of 1998, Larry moved from WSTS to a home in the community in Riverton for a 90 day evaluation and in June of 1998, he made that his permanent home. He has been a huge part of the Community Entry Services family for 20 years.

He attended day services at CES and helped to support himself by working at recycling and shredding documents at CES. He did his jobs well and was very proud of any work he accomplished. He retired from work in January of 2015, but he continued to collect aluminum cans every Friday and turn them into recycling for soda money.

Larry was a remarkable person. Although his speech and hearing was impaired, he was knowledgeable beyond what those limitations allowed him to express. He used signing, pictures, and gestures to communicate. If you had trouble understanding him, he would take you by the hand and show you what he was talking about.

Larry’s life has been full of challenges and he has always met those challenges with dedication and perseverance. Even though he struggled with severe seizures and physical disabilities, he was not aware that he had any limitations and he lived his to the fullest. He had a severe seizure/stroke in 2008 and he had no control over any part of his body from the neck down. Doctors and therapists projected that he would remain in that condition the rest of his life. CES staff were dedicated in him keeping movement in his body and extremities. Larry saw no limits and he worked hard and he was able to hold his own utensils and feed himself within the first year. He was very excited at every skill he got back and he was especially impressed when he could maneuver his own wheelchair. He was an inspiration to everyone around him and he knew no boundaries. If he came up with an idea, he knew it could be done.

Larry was an intricate part of his community and many people knew him well to include businesses, the police and fire department and many longtime residents of Fremont County. He would always run into people who knew him when he was out and about. He had many friends at CES and in the community. He was especially fond of a young woman, Khristee. He made sure to include her in his gift giving and he showed her a tremendous amount of tenderness, especially when she did not feel well. He could not communicate with her verbally, but she knew he had a kind and loving heart that was dedicated to her.

He loved construction sites and heavy equipment. He spent many hours watching them work. He watched maintenance work at CES and he had his own set of tools. He loved trains and traveled to Shoshoni several times and Rock Springs to watch them. He loved to travel places like Casper and Thermopolis. He went on a float trip in Jackson with the Frontiers program at CES. He participated in Special Olympics bowling. He went to CES camp above Lander and went on day trips on the pontoon boat and he loved to fish. He loved tacos, chicken, raspberries, peanuts, snicker bars, and pepsi. He enjoyed Tabasco so much that he carried his own bottle so he was never without it. He especially loved children and would claim them as his own. He used to have a condition where his nose was large and this seemed to make children fearful of him. He got surgery on his nose after coming to CES and he was ecstatic when he looked in the mirror after his bandages were off. He gave everyone the thumbs up and tears welled in his eyes. Children were much more accepting of him after that and he enjoyed that immensely. He loved photographs, music, drums and Native music, movies and he especially liked to be in charge of the remote. Larry had a wonderful sense of humor and he loved to play practical jokes on people. He loved keys and he would take your keys and phone and he would get people to help him hide them. He would hold a finger to his lips to make sure that you were quiet about it and then he would grin from ear to ear when the person was frantic, looking for their items! He would laugh and laugh when he ‘got caught’ and you always knew that he was involved in the prank!

Halloween and Christmas were Larry’s favorite holidays. He loved to pass candy out to the children and he loved to see “HO HO”. It was only fitting that the last evening he spent on earth was eating chicken legs at Kentucky Fried Chicken and then at CES Festival of Trees during family night with Santa Claus, friends and children all around. He had a great time.

Larry had many friends and family at CES and he has lost several over the years. He always knew and mourned their deaths and he had a faith in Heaven. He would always point towards Heaven, put his hands together and bow his head in prayer for those who passed before him. Now, we put our hands together for you Larry and look above because we know you are in your Heaven. We will miss you always and forever.