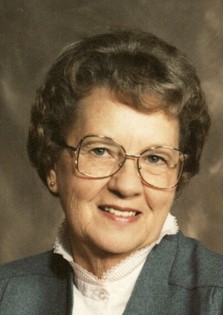 Funeral services will be conducted at 2:00 p.m. on Wednesday, June 11, 2008 at Davis Funeral Home, with the Rev. Don Schlichting of the United Methodist Church officiating. Burial will follow at Mountain View Cemetery.

A viewing will be held one hour prior to the service.

Maxine L. Loosemore was born October 2, 1920 Blendon Towhship, Michigan, MI, the daughter of Richard and Julia (Parm) Loosemore. She moved to Lysite at a young age with her family, and grew up there. She attended school in a one-room school house at Bridger Creek in the Lysite area.

On July 17, 1939 she married Jack Luoma, Sr. in Casper, Wyoming. The couple lived in Lysite where they were ranchers. They moved to Worland and in the late 1950’s to Pavillion, where Mr. Luoma was employed by the county.

She was a homemaker and a part time clerk at the Pavillion Post Office.

Her family said Mrs. Luoma enjoyed gardening—vegetables and flowers—caring for her yard and rock hunting with her husband.