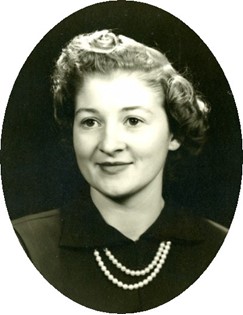 Betty Ann Conat was born on December 25, 1932 near Oakes, ND to William Sidney and Ilah May “Toots” (Corliss) Conat. She grew up in the small town Straubville, ND with her two sisters. She attended a one room school house in Straubville for grade school. When it was time for high school she and her sisters attended Oakes High School in Oakes, ND. During the winter months they lived in town with a lady and only went home on the weekends.

After high school, she moved to Riverton to be with her future husband, William Francis Brown. They were married on February 27, 1950 in Riverton at the original Methodist Church. They raised their three boys in Riverton until 1963 when they moved to their farm in Midvale area. They retired in 2000 and had a new home built on the 8 Mile Road farm where she lived until her passing. They shared their lives for 66 years before Bill passed in 2016.

Before moving to Riverton Betty worked in an insurance office in Oakes as a secretary. After marriage she became a homemaker, full time mother, and worked on the family farm with Bill.

Betty loved to be outside. Working on her lawn and planting flowers were on the top of her list. During the cold months, she had her house plants that kept her busy. She loved being with her husband and all his adventures, reading books, caring for sheep, and being with her grandchildren and enjoying all they were involved in.

Memorials may be made to the Alzheimer’s Foundation in care of Davis Funeral Home, 2203 West Main Street, Riverton, WY 82501.