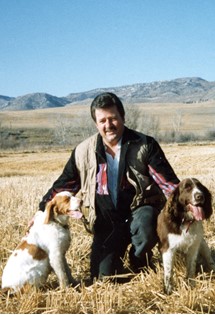 Guestbook 8
Mickey G. Stoeger, 72, of Riverton died Saturday, February 17, 2018 at his home. According to his wishes cremation has taken place and there will be no services.

Mickey George Stoeger was born December 5, 1945 in Riverton to Elwin Francis and Weletta Mable (Smith) Stoeger. Mickey lived the majority of his life in Riverton, graduating from Riverton High School in 1964. He served in the Wyoming Army National Guard from 1963 – March of 1969 being Honorably Discharged. He was recognized as a field Artillery Crewman and Sharp Shooter. Mickey was chosen by Governor Clifford Hansen to be the Wyoming Guard Representative during the funeral service of President John F. Kennedy.

Mickey worked for IGA the majority of his career. Starting directly out of high school he worked for Thrift Way Market and Mr. D’s Food Center in Riverton and later in Lander. In 1980 SuperValu / IGA hired Mickey out of Wyoming to manage IGA stores in Montana. This included grocery stores located in Livingston and Bozeman, MT. SuperValu transferred Mickey back to Wyoming in 1998, working at Woodward’s IGA and later as store manager for the IGA store in Worland.

He was one of the original Life Members of the Rocky Mountain Elk Foundation; he was a member and president of the Gallatin Empire Lions Club of Bozeman, MT. He was a recipient of the Melvin Jones Fellowship Award for Dedicated Humanitarian Services from the Lions Clubs International Foundation. He also served as chairman of the Montana Food Distributors while residing in Bozeman.

He enjoyed hunting, fishing, camping and loved the outdoors. Mickey was a member of the Methodist faith.

He was preceded in death by his parents, and step-father, Melford Hedglin; sister, Judy Stoeger. Memorials may be made to the Friends of Hospice or the Alzheimer’s Association in care of Davis Funeral Home, 2203 W. Main Str., Riverton, WY 82501.

Arrangements are under the direction of the Davis Funeral Home. (TheDavisFuneralHome.com)