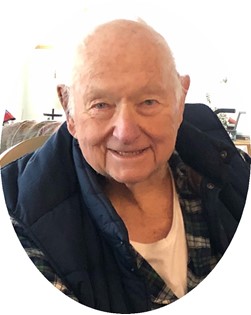 He passed away on Wednesday. March 28, 2018, at the Wind River Healthcare and Rehabilitation Center.

Bill was born on May 01, 1935 in Long Pine, NE to Alvin E. and Lela A. (Bartlett) Carpenter. He was an identical twin with his brother, Bob, which were born into a family of one brother and two sisters. He graduated from Bassett High School in NE with the class of 1953.

The following year on July 16, 1954, he married the love of his life, Darlene Elaine Wood in Bassett, NE. They moved to Riverton, WY that same year where they raised their sons, Steven and Randy.

He worked at Chopping Chevrolet for twenty eight years before retiring and starting his own business, C&H Electronics which has supplied model airplane parts for over Twenty-five years.

In his spare time Bill enjoyed playing the saxophone and was a member of many different groups over the years. Bill loved flying model airplanes and was instrumental in starting the local chapter of the Wyoming American Modelers Association. He was on the ground floor of the Modelers Park off of HWY 26.

He is survived by his wife of over 63 years, Darlene; sons, Steven Carpenter and Randy Carpenter and his wife, Candy; granddaughters, Venessa and Heather; great grandchildren, Abbey, Kaiden, and Hannah; brother, Bob Carpenter and wife Jean; and numerous nieces and nephews.

He was preceded in death by his parents, Alvin and Lela Carpenter; an infant son; one brother; and two sisters.

Memorials may be made to PAWS for Life or St. John’s Lutheran Church in care of Davis Funeral Home, 2203 West Main Street, Riverton, WY 82501.