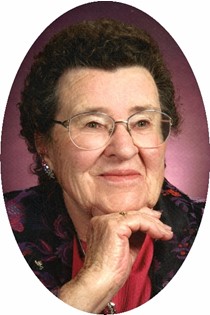 Guestbook 16
Wanda Lucas, 94, of Riverton, passed away on Friday, March 30, 2018, at the Wind River Rehabilitation and Care Center. The funeral service will be held at 2:00 pm on Friday, April 6, 2018, at the Riverton United Methodist Church. A viewing will be held from 1:00 pm to 2:00 pm prior to the funeral. Interment will be at Mountain View Cemetery.

Wanda E. Williams was born on January 22, 1924 in Lander, WY to Lisle and Minnie (Casto) Williams. She grew up in Riverton and graduated from Riverton High School with the class of 1941.

On September 27, 1942 she married Arthur Lucas at the family farm near Delfelder in rural Riverton. They lived in the Riverton area except for three years when Arthur worked at the Defense Plant in Grand Island, NE during WWII. They then returned to Riverton and raised their two sons, Jim and Ronald, and their daughter, Cheryl, on the farm until they retired in 1984. She and Arthur were married for 64 years before his passing in 2007.

She worked side by side with Arthur on the farm while raising their children, and also worked with the post office. She was a postal employee for three years before she became a mail carrier for 25 years. Not only did she work full time, she was also a 4-H leader for over 30 years and was active in FFA while her children and grandchildren were involved. She also loved hunting, fishing, and was an “avid” card player.

She was named Farm Woman of The Year in 1991, was a member of Arapaho Homemakers Club, Good Sam’s, and Arapaho Grange Number 50.

Memorials may be made to Fremont County 4-H in care of Davis Funeral Home, 2203 West Main Street, Riverton, WY 82501.