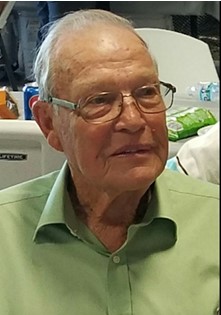 Guestbook 2
Alvin “Al” Ward, 85, of Riverton passed away at his home on Sunday, April 8, 2018. As were his wishes cremation has taken place and no services will be held at this time. A Celebration of Life will be held at a later date.

Alvin Franklin Ward was born on December 5, 1932 in Jennings, OK to Jack and Nora May (Storm) Ward. He grew up in a large family and attended schools in Texas. He received his Bachelor’s Degree in Geology from Sul Ross State College in Alpine, TX.

After receiving his degree he worked in Pampa, TX as a geologist for five years. He moved to Riverton in 1960 and made it his forever home.

On September 5, 1990 he married Elaine Welch in Boulder, CO.

He enjoyed golfing, hunting, and fishing.

He was preceded in death by his parents and all of his brothers and sisters.

Memorials may be made to the Junior Golf Program of Riverton in care of Davis Funeral Home, 2203 West Main Street, Riverton, WY 82501.