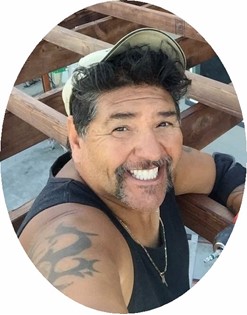 Guestbook 28
The funeral service will be streamed live on Facebook..

Arturo “Art” Mejorado, Jr., 55, of Riverton became ill and passed away on April 29, 2018 in Phoenix, Arizona while on his annual motorcycle ride with his wife Teresa and a few of his motorcycle brothers. A rosary will be recited at 6:00pm on Friday, May 4, 2018, at St. Margaret’s Catholic Church. A wake will follow at the Mejorado residence, 7 Mejorado Circle. The funeral service will be held at 11:00 am on Saturday, May 5, 2018, at St. Margaret’s Catholic Church with a reception following at St. Margaret’s Gym. Art will have his “Final Ride” Friday morning May 4, 2018, please meet at Country Cove at 10:00am if you would like to be a part of this procession.

Arturo Mejorado, Jr. was born in Riverton, Wy. on July 22, 1962, to Arturo Mejorado, Sr. and Annie (Vigil) Mejorado. He was raised in Riverton with his sister, Anna (Mejorado) Warren, where he graduated from Riverton High School and lived most of his life.

On April 10, 1982 Art married his true love Teresa Marie Russell. From that point on they embarked on an adventure of a lifetime. They were blessed with three sons, Jared, Jeremy and Julian who in turn gave them 10 beautiful grandchildren. Papa Turtle cherished his grandchildren for keeping him young and out of mischief. Art loved his wife greatly and was proud that they had just celebrated 36 years of marriage.

Arturo Mejorado, Jr. was a devoted husband, father, grandpa, son, brother, uncle, cousin, friend, and coach. One thing that can be said about Art is that, “If you were lucky enough to meet Art, your life was blessed and you had a better life with him in it.” He was a great man, who always had a sincere smile on his face and a joke to make you laugh. Art was a true family man who cherished the time spent with all his family. He enjoyed visiting with old friends and new, whether it was during a bike ride, Old man coffee, or during one of his carp tournaments. One thing about Art, is that he was sure to entertain a crowd with his adventurous spirit and contagious laugh.

Art lived his life for his family, and everybody that knew him would agree. He enjoyed every day spending time with his family whether it was camping, boating, bow fishing, riding motorcycles, or just fixing things on the 3D Ranch. He loved teaching life lessons, coaching his kids, and educating them on how to fix almost anything that was broken. He spent many precious hours with his grandchildren watching movies in his self-made theatre, racing them on the dirt track at his house, or making 307 rocks to hide around town just to watch the smile it would bring for a stranger or friend to find one. Art made it a point to spend quality time with his Mom, Annie Mejorado, and his sister Anna Warren whether it was coffee or lunch dates, or just dropping by for a visit. Art was known for his kind heart and willingness to help anyone in need. He lived every day to the fullest and always had an adventure planned.

At the time of his death, Art was employed for Devon Energy where he had worked for the last 20 years. He was also busy running his own company Mejorado and Son’s, with his beloved sons.

He was preceded in death by his father, Arturo Mejorado, Sr. and his mother-in-law, Beverly Russell.

Memorials may be made to Arturo Mejorado, Jr. for the grandkids movie and popcorn fund in care of Davis Funeral Home, 2203 West Main Street, Riverton, WY, 82501.