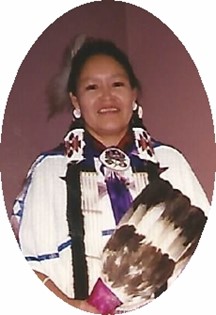 She was born on March 6, 1955 to Amiel Nickerson Quiver and Ann Merle Friday Quiver of Ethete, Wyoming, Wind River Indian Reservation. Ruby graduated from Chilocco Indian School, Oklahoma. She earned an Associate of Science degree from CWC. Ruby earned a Bachelor of Science degree from the University of Wyoming. She was a member of the armed forces serving in the U.S. Army.

Ruby was an active and dedicated member of the Native American Church. She was a catechumen of the Catholic Church, as well. She was a woman of strong faith and belief in the power of prayer.

Ruby enjoyed spending time beading and sewing for her grandchildren and other family members. She liked to attend dances. Ruby enjoyed watching her loved ones play in basketball games and tournaments. She enjoyed cooking for special occasions. It made her joyful to have her family and relatives participate in all the Arapaho Ceremonies.

She knew the Arapaho Language from her Grandparents and held it dear to her heart.

She is proceeded in death by her Grandparents, Parents, and Sister.

If we left anyone out, we apologize for the exclusion and please forgive us, at this time. Ho Hou