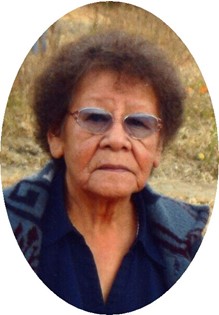 Frances Dewey was born on May 10, 1940 in Arapahoe, WY to Andrew Raphael and Flora (Goodman) Dewey. She grew up in the Arapahoe area. She attended Flandreau Boarding School in her early education and came back and graduated from St. Stephens Mission School.

She was baptized into the Catholic faith. She was also a member of the Native American Church where she was very active.

She lived in Fort Worth, TX with her twin sister, Joann, for five years before moving to Denver, CO for three years. She then returned home and spent the rest of her days surrounded by her grandchildren.

Frances worked as a nanny for five years in Chicago, IL then worked for Brunton Inc. for ten years. She found her passion teaching the Arapaho language and culture at St. Stephen’s Indian School for twenty years. After she retired from the school she continued to teach the Arapaho language at the TANF program.