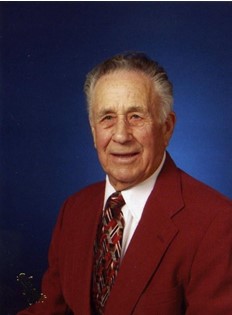 
Claude Briddle, 97, of Riverton passed away on Sunday, June 3, 2018. A memorial service will be held at 10:00 am on Monday, June 11, 2018, at Davis Funeral Home. Inurnment will follow at Mountain View Cemetery with military honors.

Claude B. Briddle was born August 4, 1920 to Homer C. and Susie Myrtle (Lay) Briddle in Cozad, NE. When he was 2 years old, the family moved to Kirksville, MO, Homer and Susie's home town. Claude grew up on the family farm, running the hills with his friends and siblings.

When Claude was 15, the family moved back to Cozad, NE for a short time but then returned to MO. However, Claude stayed behind and that is where he met the love of his life, Elsie Mae Rosendahl. They were married in Detroit right before Claude shipped out with the Army Air Corp. Claude served in WWII in the South Pacific, while Elsie was a Rosie the Riveter in Detroit.

After the war, Claude drew a homestead on the Midvale Irrigation district in Fremont county. He chose a farm on the highway half way between Riverton and Shoshoni. Claude and Elsie turned sagebrush and gullies into a beautiful farm. They raised alfalfa seed, oats, corn, pinto beans, malt barley, hogs, and alfalfa hay. Elsie passed away from cancer in 1978. Claude's son Jim moved home to the farm and started a veterinary practice in an old hog shed. Claude sold the farm to Jim and moved to Riverton in 1985.

Claude was active in all things farm related, VFW, American Legion, was on a Bowling league, and loved golfing in his retirement. He was a member of Trinity Lutheran church.

Claude is survived by his son Jim and wife Kim; granddaughter Katie Romer and her children Rylee and Mason; granddaughter Jeanne and Joey Dickinson and their children Jayla, Jase, and Jaden. He is also survived by brother Glenn, sister Eunice, numerous nieces and nephews, and companion Betty Hurley. He was preceded in death by sisters Leila, and Ruby, and brother Chet.