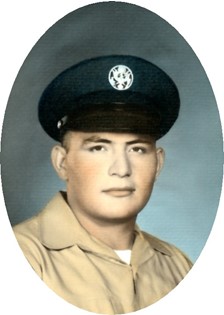 Juan Benito Trujillo was born on August 6, 1939 in Costilla, NM to Eloy and Avelinda (Arellano) Trujillo. He grew up in Rock Springs with his one brother and six sisters. He attended grade school through middle school there before the family moved to Fremont County. He attended Fremont County Vocational High School where he played football and was on the wrestling team. While attending school and sports he also worked at the Diane Drive-In Theater which started demanding much of his time so he had to give up the sports. He was a proud graduate with the class of 1958.

Immediately after graduation from high school, he signed up for the U.S. Air Force and was sent to San Antonio, TX for basic training. He remained in the U.S. Air Force for the next twenty years, retiring in 1978. During his time in the service, he completed three tours of duty in Viet Nam, while being assigned to various places, including time at bases in Anchorage, Albuquerque, Denver, and Cheyenne, His last post was at the Pentagon in Washington, D.C. where he retired. After he retired from the service, he returned home to Fremont County and worked for the City of Lander until he retired.

He married Elva Eaton and became father to her three children.

He was a member of the Veterans of Foreign Wars in Hudson and Lander.

John spent summers in the yard, he loved gardening and giving away his vegetables. In the winter he spent his time in his most comfortable chair watching his favorite sport – he was an avid football fan. Most of all, though, he loved to spoil his nieces and nephews, and was known lovingly as “Uncle Jay”. He always made an appearance on their birthdays with just the right gift.