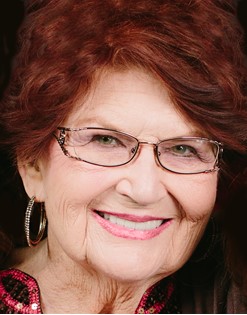 Guestbook 15
Alice “Lorraine” Peery Larsen, died, after a short illness, at the Wyoming Medical Center in Casper, WY on July 16, 2018. She was 86 years old. Lorraine was surrounded by all her children, and many other loving family members.

Lorraine was born June 5, 1932 to Paige Leever Peery and Alice Verena Smith Peery in Payson, Utah. She attended high school and graduated from Payson High School. After graduation she went to work at the Payson Hospital as a nurse’s aide. It was there that she met the love of her life, John “Jack “Larsen. They were married at her parent’s home in Payson on January 21, 1951. In 1960 they were sealed together as a family at the Manti Temple in Manti, Utah. Jack worked at different mining operations around Utah and Wyoming, finally settling in Riverton where they raised six children.

They were a great team and Lorraine played a key role in helping her husband to start many companies, including US Energy in Wyoming. Jack often said that he could not have created the successful business ventures he was involved with without the help of his adoring and talented wife who when not at his side in his travels, was always taking care of the children and keeping the home front safe and ready for his return. Often he would meet people from other countries and talk them into hopping on the company plane and coming to see the Wyoming they both loved so much. These guests were most often a “surprise” for his wife, but she always greeted any guest to her home with her beautiful smile, great food and a very gracious and loving home.

Lorraine loved to read, garden, do needlepoint, travel and in her later years, was the biggest fan of Dr. Phil. But more than anything she loved spending time with her children and grandchildren. She attended dozens of sporting events, dance and music recitals, plays, dirt bike races and did not hesitate to tell those she was sitting with how proud she was of her children. A special treat were days at “Grandma Lorraine’s” pool and tea parties she would do, just for the kids.

She was a member of the Church of Jesus Christ of Latter Day Saints, the Riverton Garden Club, and the Coffee Club where she had many close and dear friends.

Reaching heaven before her, and we know the one waiting to once again hold her close, was her adoring husband Jack, granddaughters Brooke and Nicole Herron, grandson, Tanner Schoonmaker, her parents Paige Leever Peery and Alice Verena Smith Peery, brothers Glen and Reid Peery and sister Fritz.

Services will be Friday, July 20, 10:00 am at the LDS Church with interment to follow at the Mountain View Cemetery. A viewing will be held at Davis Funeral home on Thursday, July 19 from 6-8pm.