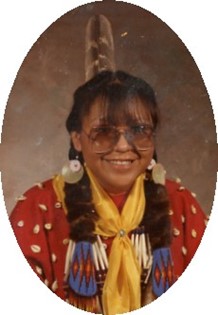 Lori Ann Spoonhunter was born on December 3, 1963 in Riverton, WY to Edwin and Julia (Brown) Norse. She was given her Native American name of “Walking Woman”. She was raised on the Wind River Reservation where she lived her whole life. She attended schools at St. Stephen’s and graduated from Wyoming Indian High School. She attended Central Wyoming College for two years studying Business.

She was baptized into the Catholic faith, practiced Traditional Ways and was member of the Native American Church.

She worked for the last twenty-two years in the Human Resource Department at the Wind River Casino.

Lori was a Traditional Dancer and enjoyed being in the Powwow’s.