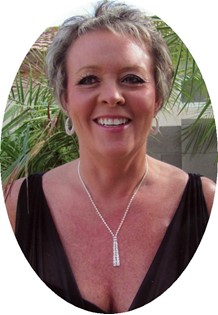 
Former Riverton resident, Wendy Ann Wilson, died August 6, 2018 at the hospital in Scottsdale, Arizona from a battle with breast cancer. She was 55 years old.

Funeral services will be held at 10:00 a.m., Friday, August 17th at the United Methodist Church in Riverton, Wy. Pastor Ken Jarrell will officiate. Burial will follow at Mountain View Cemetery.

Wendy A. Wilson was born on January 11, 1963 in Omaha, Nebraska to John and Deanna Wilson. She was raised in Nebraska, spending most of those years in Gering. In 1980, the family moved to Riverton. She graduated from RHS in 1981. After graduation, she attended the University of Nebraska before moving to Arizona.

She worked for Dash Designs as their sales representative for the state of Arizona before accepting a position at Brock’s Supply where she worked for 14 years.

She was a member of the United Methodist Church. She was involved with many groups of people in Arizona and enjoyed their friendships. She enjoyed traveling and especially traveling with the Mogollon Band. She traveled several times a year to Wyoming to spend time with family and friends.

She was preceded in death by her father, John Wilson; her grandparents, Gail and Stella Clay and Bill Wilson.

Memorials may be given to the United Methodist Women of Riverton or to a charity of your choice in care of Davis Funeral Home, 2203 West Main, Riverton, WY 82501.