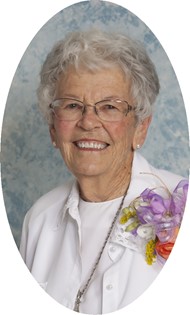 
Mary K. Lamming, 94, of Riverton passed away at her home on Saturday, August 11, 2018. A memorial service will be held at 10:00 am on Monday, August 27, 2018, at the Riverton United Methodist Church with Pastor Ken Jarrell officiating.

Mary Katherine Winchell was born on February 6, 1924 in Greeley, CO to Karl F. and Mildred (Morgan) Winchell. When she was two years old the family moved to Rock Springs, WY, then at age fourteen the family moved to Cheyenne, WY. Mary graduated from Cheyenne Central High School with the class of 1941, then attended the University of Wyoming and Denver Uni-versity.

She was an avid member of the Methodist faith, active in the Riverton United Methodist choir and the United Methodist Women, doing whatever was needed even at the age of 94. In 1945 she married Robert A. Finch, shortly afterward, moved to Riverton, WY. They had two boys together, Gary and Martin. When the Korean War broke out, Robert was sent to the con-flict. He was listed as missing in action and never returned to Mary. She raised her two sons by herself until she found love again in William (Bill) F. Lamming. They were married in 1955. Bill lovingly helped Mary raise her two sons as his own. The family grew to include two more sons, Frederick and William. Mary and Bill were married for over 57 years before she lost him in 2012. Mary never left Riverton as it was her forever home.

Mary was always involved in many activities including the Junior Women’s Club of Riverton, which she was a charter member, the P.E.O. Organization, Friends of the Library and numerous events at the Methodist Church.

Mary worked for the Riverton School District #25 for sixteen years in various positions from substitute teacher to the business office.

One of the greatest joys for Mary was spending time with Bill at their cabin above Dubois. There the family always enjoyed fishing, snowmobiling and all of nature’s beauty. Her family grew to include four daughters-in law, seven grandchildren, nineteen great grandchildren, and seven great great grandchildren all of whom she loved dearly. Mary loved music. She started singing with the Methodist Choir in Rock Springs at the age of 11, sang with the Melodees, a women’s barbershop group, and continued until just recently. She enjoyed visiting with friends and doing activities with them. She is survived by her four sons, Gary Finch and wife, Sue of Casper, WY, Martin Finch and wife, Cecilia of Sherman, TX, Frederick Lamming and wife, Tracey of Jackson, WY and Wil-liam Lamming and wife, Marlene of Casper, WY; her seven grandchildren, twenty great grand-children and seven great great grandchildren.

She is preceded in death by her parents, Mildred and Karl; sister, Elizabeth; first husband, Rob-ert, and her second husband, William.

Memorials may be made to the Riverton United Methodist Church or Friends of the Library in care of Davis Funeral Home, 2203 West Main Street, Riverton, WY 82501.