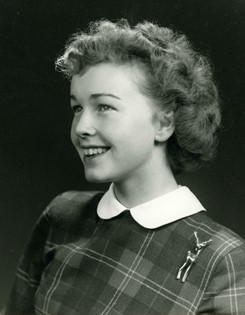 
Joyce Kilmer, 85, of Riverton passed away on Tuesday, September 18, 2018, surrounded by her family, at the Wyoming Medical Center in Casper, WY. A memorial service will be held at 1:30 pm on Tuesday, September 25, 2018, at St. James Episcopal Church. A reception will follow at the Jewett Fellowship Hall.

Joyce Esther Walter was born on February 23, 1933 in Sterling, IL to Albert and Luella (Conkling) Walter. She lost her parents at a young age, she moved to Node, WY to be raised by her Aunt Emma Walter. She attended rural school in Node until her junior year in high school when she moved into Lusk, WY, where she graduated from Niobrara County High School with the class of 1950.

Joyce had a deep faith in the Lord and was a member of St. James Episcopal Church. Joyce was the head of the alter guild for many years, a member of the Order of the Daughters of the King, and also hosted many book studies.

On December 27 1953 she married the love of her life, Willis “Bill” Eugene Kilmer, in Lusk, WY. They moved to Riverton, WY in the fall of 1960 from Eastern Nebraska. They made it their forever home and where they raised their two children, Kevin and Sheri.

Joyce worked at Lincoln Elementary School kindergarten classes for 19 years and enjoyed all the children over the years. She worked for Jerry Kintzler at Jerry’s Flowers and Things for a couple years arranging flowers which she loved.

Joyce was an artist and loved to paint. Two of her painting have hung in the Wyoming Senator’s offices in Washington D.C. She also enjoyed golfing, landscaping, gardening, camping, and fishing. She also enjoyed being with her church family and participating in church activities. Above all she loved spending time with her family.

She is survived by her husband of over 64 years, Bill Kilmer; daughter, Sheri Burke of Gilbert, AZ; granddaughter, Krista Stinson of Gilbert, AZ; nieces, Brenda Pfister and Kathy Kellogg; and in-laws, Kay and John DeGering of Lusk, WY.