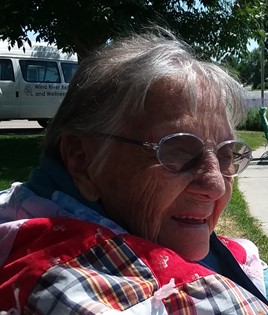 Waunetah Irene Loghry was born October 7, 1930 in Burwell, Nebraska to Harry and Nellie (Schafer) Loghry. She grew up in Riverton where she has been a Riverton resident for 87 years.

She owned the Riverton Greenhouse from 1965 – 1977. She continued to work for Sweetwater Gardens for 20 years.

Waunetah loved to knit and crochet. She made all of her children blankets. She also loved to garden and collect rocks. She belonged to the Eagles Club and was of the Christian faith.

She is survived by her son, Tom Avery of Elko, NV; two daughters, Connie Avery of Riverton and Dawn Beer and husband Ken of Meeteetse, WY; six grandchildren and four great grandchildren.

She is preceded in death by her parents, Harry and Nellie Loghry; husband Tom Avery; daughter Earline Avery and her husband Bill Quimby; brother, Robert Loghry; and her sister, Viola Quinn.