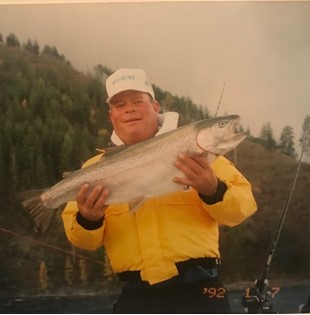 Guestbook 20
A Memorial service for Michael “Mike” Myron Jarvis, 65, who died on October 14, 2018, will be held at 10:30 am on Tuesday, October 23, 2018, at Missouri Valley Fire Hall with Pastor Echo Klaproth officiating. Cremation has taken place under the direction of Davis Funeral Home.

Mike was born on February 14, 1953 in Thermopolis, WY, son of Myron C. and Betty Jean (Comes) Jarvis. While growing up in the Hidden Valley area, Mike attended and graduated from the Shoshoni High School. He then attended Wyo Tech where he studied Auto Mechanics.

On July 20, 1974, Mike married Paula M. Fabrizius in Riverton, WY. In the years to follow, they welcomed three boys, David, Mac, and Beau. The boys inherited their love of the land and family from both parents.

Mike worked as a mechanic for a while in Casper before he became a farmer/rancher at the Herschel Roberts place. Eventually, Mike purchased this land, and it is where he and Paula raised their three boys. Mike operated Mike Jarvis Trucking and Jarvis Farms along with his boys where he logged endless miles hauling home grown crops throughout Wyoming and surrounding states. He resided at his Hidden Valley home for the remainder of his life.

Mike enjoyed spending his time outdoors hunting, fishing, camping, flying, and most of all, ice fishing. He also loved visiting with his friends and swapping fish stories. He took pride in furnishing “The Cabin” to accommodate his hunting and fishing buddies. He will always be remembered for his pig roasts, contagious smile, infectious laugh, larger than life stories, and ….. bib overalls! There was no such thing as a stranger to Mike.

He was a member of the Masonic Lodge in Shoshoni and was retired from the Missouri Valley Fire Dept. Throughout his life, Mike received many awards for his hard work and dedication on the family farm and involvement in the community.

He was preceded in death by his wife, Paula in 2011, his father, Myron and wife’s parents, Alfred and Eleanore Fabrizius.

Memorials may be made to the Missouri Valley Fire Department in care of Davis Funeral Home, 2203 West Main Street, Riverton, WY 82501.