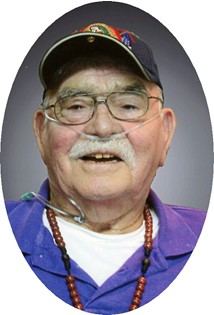 David was born on April 18, 1928 in Mora, New Mexico to Carlos and Hilaria (Trujillo) Apodaca. David moved to Riverton with his parents in 1941.

He was a member of St. Margaret’s Catholic Church and the Fraternal Order of the Eagles.

On March 13, 1947, he married his soul mate, Sibilia (Cindy) Avila. Together they raised a wonderful family of five girls and two boys.

David worked at Empire Timber for 16 years until the sawmill burned down. He then worked several odd jobs until going to work for Riverton Concrete in 1965 and worked there for 25 years until he retired.

David was a loving and dedicated husband, father, and grandfather. His truest enjoyment was his faith and family. In his younger days he also enjoyed piddling with his tractors, riding his horse, bowling and dancing.

Memorials may be made to St. Margaret's School in care of Davis Funeral Home, 2203 West Main Street, Riverton, WY 82501.