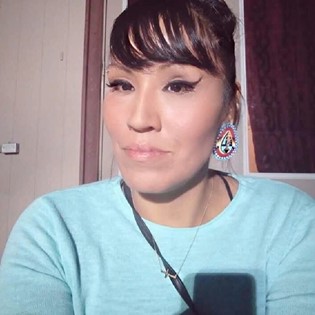 Guestbook 7
Rosalynn “Rozzie” Antelope, 34, of Arapahoe, WY, passed away on Monday, October 22, 2018, at the Sage West Hospital – Riverton. A rosary will be recited at 7:00pm on Friday, October 26, 2018, at Great Plains Hall with wake to follow. The funeral mass will be held at 10:00 am on Saturday, October 27, 2018, at St. Stephen’s Catholic Church with father Bryce Lungren officiating. Burial will follow at the Arapaho Catholic Cemetery.

Rosalynn Amanda Antelope was born on April 24, 1984 in Riverton, WY to Terrance and Edna (Washington) Antelope. She grew up in the Arapahoe area and graduated from St. Stephen’s High School. She lived most of her life in Arapahoe except for two years in Sioux City, IA, but then she came back home.

She was a homemaker but had worked in housekeeping and the food service industries.

Rozzie loved dressin up, beading, traveling to Pow-Wows, volunteering, finding treasures, and helping others. But having movie nights with the kids was the best. She will remembered as a good hearted woman.