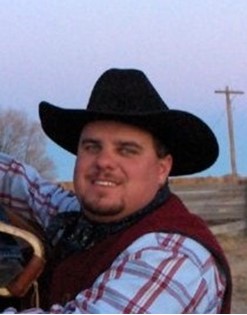 Guestbook 29
Ryan M. Gibson of rural Riverton died Saturday afternoon, July 26, 2008, at Riverton Memorial Hospital after a brief illness. He was 31. There will be a viewing from 5 to 7 p.m. Tuesday, July 29, at the Davis Funeral Home. Funeral services will be at 2 p.m. Wednesday, July 30, at the funeral home with his uncle Bob Storey officiating. Interment will follow at Mountain View Cemetery in Riverton. Ryan Michael Gibson was born in Helena, Mont., on July 15, 1977, the son of James Stephen "Steve" Gibson and Karen Rae (Storey) Gibson. He grew up in Rawlins and Cheyenne and was graduated from Cheyenne Central High School in 1995. He attended Laramie County Community College for two years, where he studied diesel mechanics, welding, and auto body. Mr. Gibson lived in northern Colorado for a few years, and met his future wife, Cody Ann Backus, in Muddy Gap. They married on Aug. 18, 2002, in Sterling, Colo. The family moved to Riverton in 2004. Mr. Gibson was manager for Stinger Wellhead Protection, having worked for the company for four years and working his way up to manager last year. He also helped Mike Ruby with rodeos, sorting stock and running the outgate in Dubois, Riverton, and Shoshoni. His family said his wife and two sons were Mr. Gibson's life and he was looking forward to a new baby in August. He also enjoyed hunting, fishing, and working on cars. Survivors include his wife, Cody of Riverton; sons, Wyette Roper Gibson and Cole Dalley Gibson of Riverton; parents, Steve and Karen Gibson of Cheyenne; grandparents, James and Rose Ann Gibson of Carlsbad, N.M.; brother, Christopher S. Gibson and his wife Lynett Westergard-Gibson of Pocatello, Idaho; father-in-law, Jay Backus of Riverton; grandparents-in-law, Jimmy and Sue Backus of Cheyenne; sister-in-law, Bess Marie Johnson and her husband Trenton of Ervay, Wyoming; good friends Kris and Kathy Zwiefel of Wellington, CO. He was preceded in death by his maternal grandparents, Robert and Doris Storey of Helena, Mont.; mother-in-law, Rosalie Backus, and grandmother-in-law, Lorraine Backus. Memorials may be made to the Gibson Children's Education Fund, in care of the Davis Funeral Home, 2203 West Main, Riverton WY 82501. On-line obituaries are available and condolences for the family may be made at: thedavisfuneralhome.com Services are under the direction of the Davis Funeral Home of Riverton.