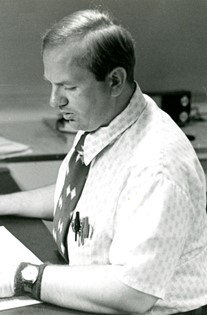 Guestbook 4
Funeral services for Gary Alan Stark, 69, will be held at 12:30 p.m., Saturday, December 15, 2018 at the Church of Jesus Christ of Latter-day Saints, 430 Elizabeth Dr., Riverton, WY with Bishop Brock Olson officiating. Interment will have been held at an earlier date at Mountain View Cemetery.

Mr. Stark passed away on December 11, 2018 at his home in Arapahoe, Wyoming surrounded by his loving family.

Gary attended schools in Riverton, where he graduated from high school in 1967. He then went on to attend Central Wyoming College and the University of Wyoming for 3 years.

He was an active member of the Church of Jesus Christ of Latter-day Saints and served a two year mission in southern California. He also served as a family history consultant, church auditor, librarian as well as Stake Sunday school Secretary.

Gary worked as a bookkeeper for various businesses as well as a night auditor, Arapahoe post office clerk and substitute teacher.

He enjoyed spending his time collecting rocks, coins, stamps and business cards. Gary was an avid genealogist and also wrote many letters to others.