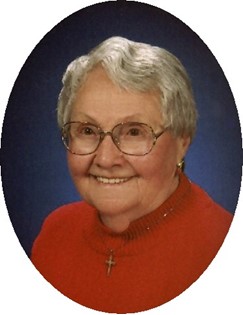 Guestbook 0
Pauline Wiedeman Heil of Riverton died Sunday morning, July 27, 2008, at the Wyoming Medical Center in Casper. She was 93. Funeral services will be at 10:00 a.m. Wednesday, July 30 at Trinity Lutheran Church in Riverton. Interment will follow at Mountain View Cemetery in Riverton. A viewing will be Tuesday evening from 7:00 - 8:30 p.m. at the Davis Funeral Home and one hour preceding the service at the church. Pauline Wiedeman was born on Oct. 19, 1914, in Scottsbluff, Neb., the daughter of David and Marie M. (Keller) Wiedeman. She married George Heil on March 13, 1933, in Scottsbluff, Neb. and was a homemaker. The couple moved from Nebraska to Wyoming in the early 30's, homesteading with her family near Ocean Lake. After farming at Ocean Lake for many years, the family moved to Riverview, where they farmed until retirement. Mrs. Heil was of the Lutheran faith and a member of Trinity Lutheran Church. Her family said she enjoyed crocheting, embroidery, quilting, and, in her younger years, fishing and camping. Survivors include her son, Ronald G. Heil of Riverton; daughters, Marlene Miller and husband Jim of Coeur d'Alene, Idaho, Carol Holt and husband Frank of Riverton, and Diana Crippen and husband Lawrence of Riverton; 13 grandchildren; 18 great grandchildren; five great great grandchildren; sister-in-laws Marie Wiedeman of Scottsbluff, Neb., and Betty Wiedeman of Riverton; a sister, Theresa "Rosie" Dahlinger of Denver, Colo.; numerous nieces and nephews. She was preceded in death by her husband, George Heil; a son, Lendell Heil; two grandsons, Kevin and Bret Miller; one sister, Lydia Weidman; six brothers, David, Victor, Ben, Robert, Fred, and Walter. Memorials may be made to the Trinity Lutheran Church or school, in care of the Davis Funeral Home, 2203 West Main, Riverton WY 82501. On-line obituaries are available and condolences for the family may be made at: thedavisfuneralhome.com Services are under the direction of the Davis Funeral Home of Riverton.