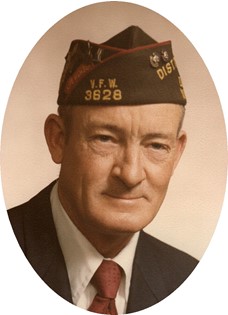 Guestbook 4
Former Riverton resident Doyle Neil died on Wednesday, Aug. 13, 2008, at the Crook County Nursing Home in Sundance. He was 83. Funeral services will be at 2 p.m. Monday, Aug. 18, at the Riverton Church of the Nazarene. Pastor Walter Gilroy will officiate. Interment will follow at Mountain View Cemetery in Riverton with committal rites by the Wyoming National Guard. Doyle Neil was born in Maysdorf, Wyo., near Gillette, on Oct. 19, 1924, the son of Curtis W. Neil and V. Mae (Irwin) Neil. He moved to Pavillion in 1936. He entered the U.S. Army on April 14, 1944, and was honorably discharged on May 5, 1945 with the Company G 109th Infantry. During World War II, Mr. Neil fought in the European Theater and was a prisoner of war, captured during the Battle of the Bulge. He received the European-African-Middle Eastern Campaign Medal with three Bronze Stars, W.W. II Victory Medal, American Campaign Medal, and Good Conduct Medal. Following the war, he returned to Fremont County. He married Olive Jean Minard on Nov. 21, 1947, in Riverton. He worked as a truck driver for Gilpatrick Construction for 32 years. Mr. Neil attended the Church of the Nazarene in Riverton. He was active in the Veterans of Foreign Wars, including past commander of Post 3628 in Riverton, past commander of VFW District 7. He was named the outstanding district commander and awarded with a trip to Washington, D.C. Mr. Neil was Fremont County Parade Marshal in 2002. His family said he liked to hunt, camp, and fish and especially enjoyed his grandchildren and great grandchildren. Survivors include his wife of over 60 years, Olive Jean Neil of Riverton; a son, Curtis Neil and his wife Marilyn of Riverton; daughters, Doylean Mariner and her husband Mike of Riverton, Patty Quarles and her husband Stephen of Riverton, and Diane Marshall and her husband Utah of Sundance; 17 grandchildren and 23 great grandchildren; a brother, Dennis Neil of Brownsville, Oregon; numerous nieces and nephews. He was preceded in death by a son, John Neil; sister, Juva Swingle; brother, Deyo Neil, and his parents. Memorials may be made to the Help for Health Van, in care of the Davis Funeral Home, 2203 West Main, Riverton, WY 82501. On-line obituaries are available and condolences for the family may be made at: thedavisfuneralhome.com Services are under the direction of the Davis Funeral Home of Riverton.