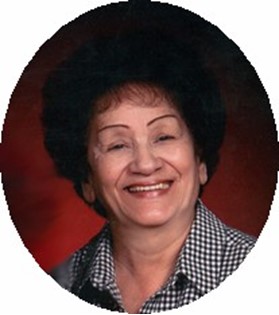 Guestbook 18
Our beloved Dorothy Elisa (Vigil) Garcia passed away at home, surrounded by her family on Wednesday, May 8, 2019. She went to join her perfect dancing partner, our Dad, Benito with our Lord in Heaven.

A Rosary will be recited on Sunday, May 12th, at 7:00 p.m., at St. Margaret’s Catholic Church in Riverton, WY, with a Funeral Mass conducted on Monday, May 13th, at 10:00 a.m., with Father Robert Rodgers as the celebrant. Burial will follow at Mountain View Cemetery.

Dorothy was born on September 16, 1933 to Daniel and Maclovia Vigil in Rawlins, WY. Maclovia passed away when Dorothy was eleven months old and she was adopted and raised by Moises and Eufemia Vigil. She married her eternal spouse, Benito Garcia and together they had seven children, which gave us a beautiful family of nine. Dorothy said she always knew she wanted to have seven children. She dedicated her life to raising her family and only after all were older, did she join Dad working for First Interstate Bank. They retired together and continued to spend the following years fishing, camping, garage selling, and spending time with their family. She taught three generations to cook her wonderful food.

She was preceded in death by her husband, Benito Garcia, her parents, Daniel and Maclovia Vigil and Moises and Eufemia Vigil, sisters, Martha Vance and Rosie Sanders, infant brother, Rudolpho Vigil and son-in-law, Steven Fullmer.

The family requests that any donations be made to St. Margaret’s Catholic School or Friends of Hospice in care of Davis Funeral Home.