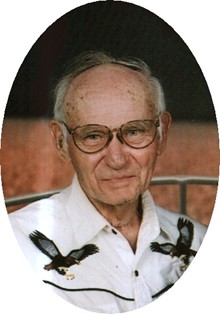 Guestbook 2
Harold F. "Hal" Bowen died Monday morning, Aug. 18, 2008, at his home in Riverton. He was 85 years old. Funeral services will be at 10 a.m. Tuesday, Aug. 16, at the First Baptist Church. Pastor Dale Adams will officiate. Private family burial will take place at Mountain View Cemetery. A reception will follow at the First Baptist Church Fellowship Hall for family and friends. There will be a viewing from 5:00 to 7:00 p.m. Monday, Aug. 25, at the Davis Funeral Home of Riverton. Harold Franklin Bowen was born in Bay City, Mich., on Sept. 3, 1922, the son of Albert and Mary (Loveless) Bowen. He was graduated from high school in Bay City and attended radio/TV repair school there. He served with the U.S. Army in the Pacific Theater during World War II. Following the end of the war he worked as a radio disc jockey and engineer until 1971. He operated his own TV repair shop in Cody and managed the Kentucky Fried Chicken outlets in Cody and Riverton until his retirement. After retirement he worked part time for the U.S. Forest Service and the Riverton Senior Center until illness forced him to quit working. Mr. Bowen had lived in Cody from the early 1950s until 1975 and had lived in Riverton since 1975. He was of the Christian faith. Mr. Bowen was a member of the American Legion, Eagles Lodge, and Veterans of Foreign Wars in Riverton. His family said he enjoyed ceramics, crosswords, had a hat collection, enjoyed yard sales, plays at the Senior Center, dancing, and bowling. Survivors include three sons, Wayne Bowen and his wife Gayle of Westminster, Colo., Ken Bowen and his wife Eadie of Sheridan, and Keith Bowen and his wife Elizabeth of Riverton; a daughter, Kathy Wilcock and her husband Bob of Mt. View; 12 grandchildren and eight great grandchildren; long-time companion, Hanna Moss of Riverton. He was preceded in death by his first wife, Mary (Herzog) Bowen; his second wife, Ola Bowen, and his brother, Jerry Bowen. Memorials may be made to the Riverton Senior Center, in care of the Davis Funeral Home, 2203 West Main, Riverton WY 82501. On-line obituaries are available and condolences for the family may be made at: thedavisfuneralhome.com Services are under the direction of the Davis Funeral Home of Riverton.