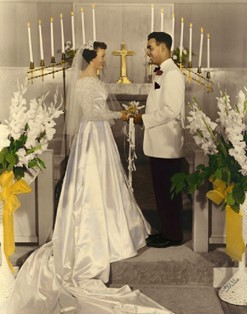 A memorial service celebrating the life of Louis R. (Bob) & Donna D. Breuninger will be held Monday, July 1, 2019 at 10:00 am, at the Davis Funeral Home in Riverton, followed by a short service at Mountain View Cemetery. Pastor Kenneth E. Jarrell of the United Methodist Church will preside.

Louis R. Breuninger, 86, of Grants Pass, Oregon, passed away on Wednesday, May 18, 2018, at the Asante Three Rivers Medical Center.

Louis Robert Breuninger was born on Feburary 24, 1932, in Mt. Pleasant Michigan to parents Louis D. and Clara T. Breuninger. Shortly thereafter, the Breuninger family moved from Michigan to Ft. Washakie Wyoming when Louis Sr accepted a job with the Bureau of Indian Affairs, working on the Shoshone and Arapaho Indian Reservation.

Donna Demerris VonKrosigk was born on September 24, 1935, in Riverton Wyoming to parents Ed and Grace VonKrosigk. Donna attended school in Riverton and graduated from Riverton High School in 1953, followed by one year of college at the University of Wyoming in Laramie.

Bob attended High School in Lander and graduated with the class of 1950. Thereafter, Bob attended Colorado State University for two years before transferring to the University of Wyoming in pursuit of a Civil Engineering degree.

With one year of college remaining, Bob and Donna were married on August 15, 1954, at the Methodist Church in Riverton. Three months later, Bob started basic training after having been drafted into the U.S. Army.

Bob’s Military Service in the U.S. Army lasted two years, which included a 13-month tour of duty in Korea. During this period, Donna worked as a Telephone Operator at the central switching office in Riverton. Thereafter, Bob and Donna returned to the University of Wyoming where Bob completed his education and received a degree in Civil Engineering.

Bob retired from the Forest Service in Jan 1991, marking the beginning of the retirement years for Bob and Donna. In retirement, Bob focused on his passion of golf while Donna loved spending time sewing and quilting. A lot of time was also devoted to traveling and visiting their three sons, wives, and five grandchildren. Bob and Donna remained in Grants Pass until their passing in 2018.

Bob and Donna are preceded in death by their parents, Louis D. and Clara T. Breuninger, and Ed and Grace VonKrosigk.