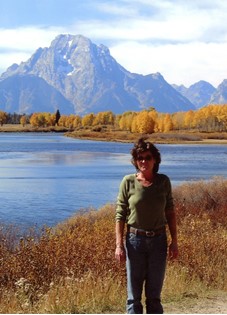 Guestbook 17
Shryle Kay Jones, 58, passed away on Thursday, June 20, 2019, at her home after enduring a lengthy illness. A Celebration of Life will be held at 11:00 am on Wednesday, June 26, 2019, at Davis Funeral Home. Shryle requested that everyone dress casual. Cremation has taken place and her ashes will be scattered by the family.

Shryle Kay Thompson was born in Bakersfield, CA on October 21, 1960 to Edward and Maralyn Thompson. She moved with her family to Lander, WY in 1965 where she attended school, kindergarten thru eight grade. The family then moved to Riverton where she completed her schooling.

Shryle married Danny Greg Jones in 1978. Together they had two sons, Charles Edward and Boone Daniel. In 1989 they moved to their home on a hill about Morton Lake and she made it her forever home. Her boys attended Wind River Schools and she was always there to support them. After 23 years of marriage, Dan and Shryle divorced but remained good companions and roommates till the very end.

While in high school Shryle worked as a waitress at Al’s Gaslite. After raising her sons she worked part time at the Kinnear Post office from 1995 to 2013, while working there she also filled in at surrounding post offices as needed. During her time with the post office she also sold Avon for eleven years. In 2007 she started working for Wind River investigations as a Process Server and continued there until December 2017 when her health forced her to quit.

Shryle loved to exercise and taught an aerobics class in Pavillion. You could always see her every day walking where ever her work took her. She loved her dogs, and just all dogs in general. Above all she loved her family and was very proud of her two sons and their accomplishments in life.

She is survived by her one and only love Dan Jones of the home place; two sons, Charles Jones and Boone Jones both of Billngs, MT; mother, Maralyn (Thompson) Jackson of Riverton; sister Marla Switzer and her husband, Roger of Casper; sister-in laws, Jeanette Befus of Provo, UT, Laurie Anderson and husband, Robert of Laramie; and many simply amazing nieces and nephews and their families, many aunts, uncles, and cousins that have been loving presences in her live.