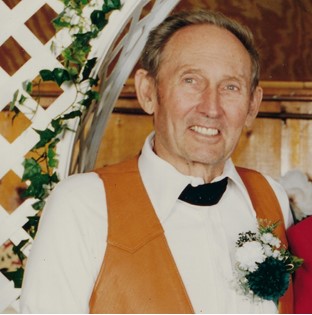 Guestbook 7
John Allen Wells was born October 28, 1928 in Oklahoma City, Oklahoma to Lola Marie Bauder and Kenneth L. Wells. John was raised by Anna Maria Peddicord (great grandmother), Ethel Renner (grandmother), and Lola (mother) in the early years in Earlsboro, Oklahoma. While in Earlsboro, as result of owning a large luxury hotel suitable for families, they endured threats and attempts on their lives by the local “line," (mob). The “line” was active in illegally peddling liquor and women during prohibition. John was about 3 years old when the “line” abducted him at gun point. He was rescued a short time later by Pretty Boy Floyd a few blocks away in a shoot-out. After the Depression hit, the family lost everything and moved to Dubois, Wyoming in 1934 with all their belongings in the car.

Ethel purchased a ranch at the foot of Union Pass road and named it the Anna Maria. John (also known as Jack in the early years) went to the Green School from first grade through fourth grade. After the fourth grade John started living with Ab and Grace Cross at the base of Union Pass, where he went to work for Cross Ranch to help support Lola, Ethel, and Anna Maria.

In November 1944, John enlisted in the Navy and spent 18 months in the South Pacific with the Eleventh Airborne Unit during WW 11. After his discharge from the United States Navy on October 11, 1947, John returned to Wyoming. He then enrolled at Montana State University in Bozeman, where he fell in love with Barbara Ann Cloninger. The two were married in Billings, Montana on January 19, 1949 and moved to Thermopolis, Wyoming.

John was up to any challenge, the more difficult the better. In 1949 he used the belly gas tank of a P-38 airplane converted to a boat to race the length of Wind River Canyon, said to be the toughest in the country; he not only raced and lived through it, but he won. John raced for several years with several partners. Ultimately, he doubled as a stunt man in white water and horse stunt scenes from 1949 to 1954 for Stewart Granger, and Charlton Heston under the direction of MGM and Paramount for movies like “White Madness”, “The Wild North”, and “Blue Horizons”. In 1953, John stayed home in Thermopolis, Wyoming. He found work running heavy equipment to build the tunnel for the railroad under Boysen Lake. John discovered this was something he did not like, quit his job after a short time, came home with $100.00. He bought a geiger counter and began prospecting for uranium. This started a successful life-long career in the mining business.

John and Barbara moved to Dubois in 1956. John became active in the community and was one of the founders of the Dubois Volunteer Fire Department. In November of 1961 John and Barbara purchased the Timberline Ranch, where they raised their three sons, Chad, Eric, and Otto. Timberline Ranch was the heart and soul of John and Barbara, they made a conscious effort to continue the tradition of hosting Miami University at Oxford Ohio Geology Field Camp. This tradition is still going strong and is currently in the 73rd year at the Timberline Ranch. Thousands of guests have been touched by the “Wells Family” hospitality that is second to none. If anyone stopped at the ranch at dinner time, they got a homecooked meal and maybe even a bed for the night, as well.

In 1964, John and Barbara and many other partners purchased the Dubois Mercantile a dry Goods and grocery store. Later they traded their interest in the mercantile to George and Marcel Letiellier for their hay field acreage three miles West of Dubois. In 1965, John and Barbara bought the Bowling Alley building, currently the Dubois Super Foods, where Barbara and Nancy Mockler started the Golden Belle, a melodrama theater. John formed a mining company in 1971, Timberline Minerals, Inc. and made the company public in 1972. John was the President and Chairman of the Board until 1987, when he sold his interest to an Australian group.

John is preceded in death by his wife of 62 years Barbara Ann Wells.

A memorial service will be held at 2:00 pm on Saturday, July 6, 2019, at the Dubois Cemetery. A reception will follow at the Timberline Ranch.