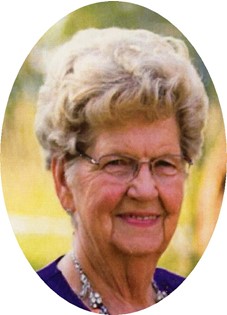 Carol Catherine Olson was born on June 11, 1935 in Casper, WY to Oscar and Anna (Sawick) Olson. In the 1940’s when she was in elementary school, the family moved to the Riverton Valley. She grew up in Riverton with her four sisters and one brother. She graduated from Riverton High School with the class of 1953.

On May 24, 1953, two days after her high school graduation, she married the love of her life, Lewis “Lew” Maulik in Riverton, WY. Together they had three children, Joyce, Doug, and Mitch. Lew preceded her in death, just four months earlier, on February 7, 2019. They spent 65 years together before his passing.

While Lew was in the U.S. Army, Carol worked as a telephone operator in Kennewick, WA. When he returned, they moved back to Riverton and she became a devoted homemaker, raising their children and being involved with everything they were doing. On January 1, 1973, she and Lew purchased Hoffman Electric and she became the bookkeeper. She retired when their son, Doug, took over the business.

Carol enjoyed raising flowers, painting, charcoal art, crafts, and was a beautiful seamstress. She made clothes for her children while they were growing up, taught sewing as a 4-H Leader, and was an alteration expert for Jean Osborne, whom owed the Place and the Wardrobe. She was a Girl Scout Leader for many years. She and Lew were devoted supporters of Sertoma, now called REACH. She created a tradition, as each year for the annual Christmas party, she would handcraft over 200 Christmas decorations for each resident of Sertoma facilitites. As a couple they enjoyed collecting antiques. A special passion was Carol’s involvement in Soroptomist International, a women’s service organization. She was a member since 1975. She was a member of St. John Lutheran Church.

She was preceded in death by her parents, Oscar and Anna Olson; husband, Lewis “Lew” Maulik; one brother, three sisters, and granddaughter, Mackenzie Salmon.

Memorials may be made to Help for Health Hospice or Soroptimist International of the Americas in care of Davis Funeral Home, 2203 West Main Street, Riverton, WY 82501.