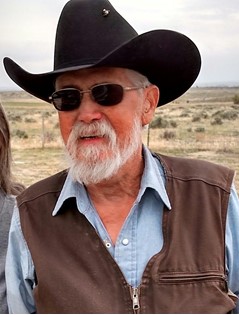 Guestbook 2
Jene R. Ward, 81, of Pavillion, passed away at his home on Wednesday, June 26, 2019. A funeral service will be held 10:00 a.m., Tuesday, July 2, 2019 at the Hillstreet Branch of The Church of Jesus Christ of Latter-day Saints. Interment will follow at Mountain View Cemetery with military honors. A viewing will be held Monday, July 1st from 6:00 until 8:00 p.m. at Davis Funeral Home.

Jene Raymond Ward was born on June 30, 1937 in Slayton, MN to Raymond and Agnes (Larson) Ward. He grew up in Minnesota with his two brothers and two sisters.

On January 24, 1960, he married Melva E. Schneider in Minnesota. They had three children: Wendy, Randy, and Thomas. Jene entered the U.S. Army on October 4, 1960 and served overseas until September 21, 1962, when he honorably discharged. The family moved from Minnesota to Arizona in a pink and black Chevy in 1963. They lived in Glendale and then moved to the desert ranch in New River.

The family moved to Wyoming in 1972 and settled in Pavillion. Jene worked for Midvale Irrigation as a mechanic for 37 years before retiring. He enjoyed woodworking, working with horses, ranch work as well as writing cowboy poetry. In his youth, he participated in rodeos across the western United States.

Jene and Melva also enjoyed being crafters, traveling all over to showcase and sell their handmade jewelry. He carried on the family tradition of craftsmanship.

He was preceded in death by his parents, Raymond and Agnes Ward; wife, Melva Ward; brother, Glen Ward; and grandson, Camden Ward.

He was a member of The Church of Jesus Christ of Latter- day Saints.

Memorials may be made to Friends of Hospice in care of Davis Funeral Home, 2203 West Main Street, Riverton, WY 82501.