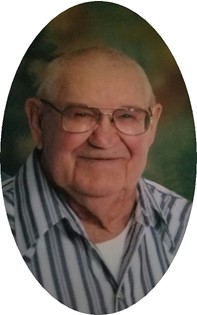 Guestbook 4
Calvin Carol Rodgers was born on March 10, 1930 in Bassett, NE to James Franklin and Ella (Kops) Rodgers. When he was young the family moved to Riverton, WY where he attended school.

Cal ran heavy equipment working road construction throughout Wyoming living in many different towns. He then built oilfield locations for Campbell Construction. He settled in Shoshoni and had lived there for the last 45 years. He was a member of the Eagles Club.

On January 15, 1972 he married Violet Margaret Sian in Greybull, WY. They combined their families and became a family of 10, one girl, Carol, and seven boys, Dick, Mike, Richard, Mike, Chris, Larry, and Steve. He and Violet were married for over 47 years before he passed.

Cal enjoyed hunting, fishing, camping, snowmobiling, building Christmas trees and crafts and yard work. He loved being with his family, children, grandchildren, and great grandchildren. He was always the life of the party.

Memorials may be made to Violet Rodgers in care of Davis Funeral Home, 2203 West Main Street, Riverton, WY 82501.